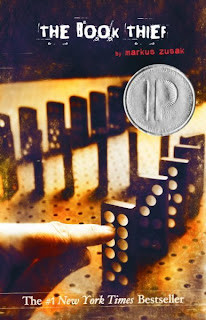 I read this on a tip from a good friend months ago, and I am still trying to figure out what, exactly, I really think about it.
The gist of it is that it's the story of Liesel Meminger, a German orphan in the 1940's who is sent to live with foster parents in a small German town. Her foster family, (the Hubermans), take in a Jewish man and hide him in their basement. The "Germanness" of the plot is significant because the action takes place before and during World War II. I've read lots of Holocaust books, but none quite like this.
For example...
1. It is written from Death's point of view. Death was quite busy during World War II, and I found it odd and abstract to think of it all in this way. The personification of Death makes me uneasy, yet I do feel like it is a very real way to communicate all the loss of life during that time period.
2. Though written in narrative-style, it's not your typical, smooth flowing narrative. The parts and chapters are choppy and skip from one time period to another with no explanation. This is weird because it leaves the reader floundering to re-orient to the plot, yet that feeling also does serve the purpose of enabling the reader to get an idea of just how choppy and unsure and unsecure life was in Germany during that time.
3. Max, who is the Jewish man hiding in Liesel's basement, is interesting because he shows the guilty-feeling side of Jewish people who hid to escape Adolf Hitler's rage. He hurts constantly for the danger he puts them in, and he is tormented by the fact that Liesel and her family could be punished or killed just for hiding him.
4. The Book Thief is named so because Liesel falls so deeply in love with reading and with literature that she steals them. I'm no proponent of petty larceny, but is worth considering the reason for Liesel's thievery. She was a young girl in a hate-filled country in an era that paid little attention to the worth of a woman's brain. I found myself being proud of Liesel, not for what she did, but for having the courage to do it.
5. There is SO much sadness and death and dying and fear and anger in this book. It is hard to chew and even harder to swallow. However, it also has tiny little "ray of sunshine" moments that remind you of the complexity of human nature.
6. It is written about the German point of view of the Holocaust, and it does a good job of showing that not all Germans were Nazis and not all Germans were supporters of the murders of those millions of Jewish citizens.
7. If you like literary devices, this piece will impress you. There is an enormous amount of allusion to future events, which would make it seem like there are no real surprises in the text...yet there are twists and turns at every step.
The Book Thief is one of those rare books that picks and stretches your mind. It's scary and sad and hopeful and unique, and it isn't a book that fits any sort of mold...which is why I like it so much! The complexity makes it a nice choice for a book club or literature study, and would easily lend itself to some deep response writing.
The Book Thief is a 2007 Printz Honor book, a prestigious literary award given to works of excellence in young adult (teen) literature. Rumor has it, there's a movie version due out sometime this year.
I still don't know if I would want to see it. 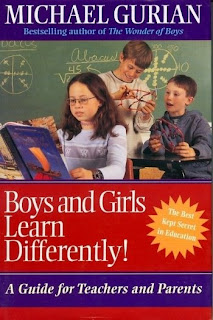 Okay, I confess...I have only read 3 chapters of this enormous book so far, but I do know that it is about gender differences in brain structure, hormones, and the implications to meeting both boys' and girls' needs in learning.

What I have read has been jam-packed with information about how the brain is set up, how it works, the different hormones and the roles they play, etc. There are charts and pictures and comparisons and descriptions of how boy brains and girl brains are wired. I have learned so much already, and I genuinely am eager to finish the book. I've experimented with some of the strategies Gurian suggests for gender-specific needs, such as permitting boys lots of movement and transitions to keep them focused. I tried that out with a couple of 5th grade boys in my reading intervention group, by letting them watch/listen to podcasts about whatever topics our daily passages were about. For the girls, I read about drawing out the relevance of their feelings and emotions to interest them in the subject at hand.

One interesting piece of information I learned was that emotive processing uses the most advanced parts of the brain, and that in order to fully engage any child in the topic, it is essential to find a way to make them feel strongly about it. I used that in a discussion with my 4th graders this year about plagiarism. I gave them some scenarios and let them talk through how they would feel if someone stole their work and passed it off as their own. They, of course, were infuriated. Then I asked them how they thought authors of websites, books, etc. (who had written info the kids were using to plagiarize for a presentation) felt with them stealing their work. It was a powerful moment for those kids because their emotions were creating their learning experience.

All of these situations of successful targeting of gender-specific learning needs showed me instantly that this book is a MUST READ for every educator. I've read lots of these professional research pieces, and rarely are they as full of practical tips for being a better teacher as this one.

My favorite aspect of the book is simply the fact that grounded, respected, scientific research confirms that there are major differences in boys and girls. For a long time we have been told to treat boys and girls the same, when I have never believed that. Both genders have been created with special strengths, weaknesses, and abilities, and it is nice to finally have that acknowledged by an authority in this field.

I listened to this one on CD. When I first picked it out, the cover art and title gave me the impression that this might be some flavor of a Salem witch trial story. In actuality, TWoBP was full of surprises.
Set somewhere in the late 1700's, 16 year old Kit Tyler was raised as royalty by her grandfather on the island of Barbados. After his death, she takes a ship to Connecticut to meet her only living family. Kit is in for quite a shock when she and all 7 of her fru fru-filled trunks get to the rigid Puritan settlement, and quickly realizes that life in Connecticut won't be much like life in Barbados.
Though her independent spirit and outspoken nature are appreciated and loved in Barbados, in Connecticut her "strange" ways quickly land her a witch accusation, and her friendship with a Quaker woman in the town (also an outcast) doesn't help much either.
One of this book's many surprises was that intertwined with the ridiculous witch hunt, Kit's adventurous voyage from Barbados, and a plague of fever that struck the colony, was a triple sided love story involving 3 guys, Kit, and her 2 cousins.
There are too many fun little details that would ruin the book if I were to share them, but overall this is a very interesting and "feel-good" kind of book, as everything turns out A-OK in the end. 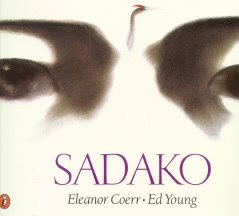 Sadako is a picture book and written on a third grade reading level, but I will say without reservation that this piece has impacted me very deeply.

Everybody knows about Pearl Harbor and the US dropping the atomic bomb on Hiroshima and Nagasaki. Many of us even have ancestors who served during World War II. We have been taught to remember it as a proud moment in our nation's history, how America (for once) showed its great might and power and delivered the blow that brought Japan to its knees.

Sadako is a narrative biography that tells the story of Sadako Sasaki, a 10 year old Japanese girl who was 9 months old when the bomb was dropped on her city of Hiroshima. Known as The Thunderbolt, the bomb not only killed thousands of people and devastated every part of Japan's existence (infrastructure, economy, etc.), but it also left behind residual chemicals that caused thousands more in the following years to develop leukemia and other cancers. Sadako Sasaki went from being an innocent little girl who had no idea about world politics and whose only concern was whether or not she would make the track team at school to fighting for her life against a sickness that was caused by a war.

Ingrained in the Japanese culture is the concept of luck and legends. One legend is that if a person folds (origami) 1,000 paper cranes, the gods will grant their wish. Sadako's sets out to folding her 1,000 cranes, and with every fold she wishes that she will get better. Sadako is unable to finish folding her last 300 or so, and after her death her schoolmates fold them on her behalf. It has become a tradition in Japan and all over the world for students to fold paper cranes and send them to the Hiroshima Peace Park in Japan, where a statue of Sadako stands in her honor.

I love this book because it lends itself to so many different topics. Just a few of the topics I could use this with students include: considering other points of view, the culture of Japan, legends and traditions, art, WWII, war in general, sickness, death, friendship, etc. 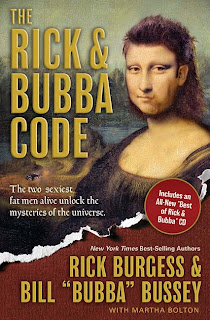 You can tell by the wad of chewing tobacco in "Mona Lisa's" jaw that this is no ordinary book. A play on The DaVinci Code (which is a fabulous work of fiction, by the way, so long as you recongize that it is fiction), The Rick and Bubba Code was written by a popular duo of radio show hosts who broadcast from Birmingham. Also known for being very strong and outspoken Christians, Rick and Bubba's Christian worldview is a very important part of this book. It is filled with funny stories about their families, and woven throughout is the relevance of faith. There isn't much meat here, but it is a nice choice if you need a light, funny read or a simple brain break. My favorite feature, I must point out, is that the Mona Lisa on the cover is sporting a mullet.

And life has been a little nuts, to say the least. But I'm back, and pondering some reviews as we speak. Yes, Randi, I'm on it!!!