Raised Right: How I Untangled My Faith from Politics (Alisa Harris) 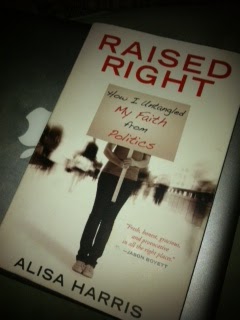 Alisa Harris's earliest memories with her family and church come from protest demonstrations at abortion clinics and community rallies promoting the latest conservative Christian (or who proclaimed to be) with big plans to take America back from the devil Democrats. In her book she gives a synopsis of how her faith and political involvement evolved from black and white to a better understanding of the gray in between.

There are a couple of important factors here that bear mention. First, it is not fair to say that Harris represents conservative Christians as a whole. Whatever your opinion on the matter of picketing abortion clinics, the fact is that not every conservative agrees with holding up pictures of aborted babies or screaming at young girls or women as they enter local clinics (Note: the book does not indicate that this is the author's experience or actions, but it is that of some in this "camp.") Second, Alisa Harris has no doubt experienced quite a journey of growth in her faith and how that applies to her political involvement, but she is still rather young. By no means do I intend that wisdom can only be imparted from those who are older (unfortunately fools come in all ages, shapes, and sizes), but it is a significant piece of the pie to consider. She was also single for most of the time described in this portion of her life, and up until publication (perhaps even to date) had no children. Marriage and the arrival of kids play a huge role in shaping one's worldview, so it would be interesting to see how those affect Harris in the years to come. I'd read it.

I'm not sure what attracted my attention to this title in the first place, but it's sufficient to say it sums up where I've been faith-wise for some time. I would not say that I'm in line with Harris on some of the issues she covers in this book. Generally, though, I appreciate the book's topic of true reflection on what you believe. Do you really know why you believe what you believe, or are you just regurgitating what you are hearing and reading online? Regardless of whether you go picket or post links on your Facebook account, it has long been true that growing up in the South generally means that good Christian=conservative Republican. It is high time to challenge that assumption, and to do so through raising our kids not by teaching them what to think but HOW to think.

It is not accurate to say that conservative Republicans have it all figured out and that liberal Democrats are in line with the devil, nor vice versa. It is not accurate to say that you are taking a stand for Jesus Christ to align yourself (especially those who do so with arrogance) with a political party. People issues are one thing, but the very complex foray into political activism is entirely another.

The truth is, our Messiah does not care about the political idols that we have established here in America. Too many times I see and hear people touting political victories as God-honoring when the only thing honored was the god of politics that somehow has people in a blinding chokehold.

Politics run on power, and Scripture teaches over and again that Jesus avoided demonstrations of power (even His triumph over death, though proven over and over, was apart from an audience) in favor of quiet displays of His love for people. All people. Poor people, sick people, defenseless people, vulnerable people. Pretty much everybody had a seat at His table. You know who really got on His nerves? The legalistic Pharisees who would have been a close comparison to some politicians today.

It is historically accurate that the church has long since manipulated by political parties (both sides of the spectrum), and that is far from what honors our God. We need to open our eyes to this...and, as Harris says in her last sentence, to be Christ's followers not through displays of power but through being a picture of love.

Raised Right: How I Untangled My Faith from Politics (Alisa Harris)