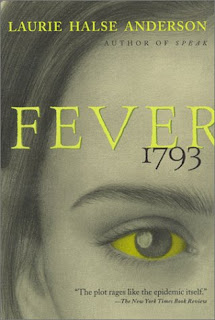 Mattie Cook is a teenager who has to grow up in a real hurry. We first meet Mattie as a girl exasperated by her mother, flirting (1700's style) with a boy, whining because she doesn't want to help out in the family's coffeehouse, and whose biggest concern is how to finagle a piece of candy from her grandfather. By the end of the next few months in her story, she has buried that grandfather, survived the fever herself, seen enough sickness and death to last a hundred lifetimes, and transformed into a young woman who realizes that she has what it takes to run the family coffeehouse.

Thanks to this book, I learned that:
-There was a yellow fever epidemic in 1793 that killed around 5,000 Philadelphians.
-Yellow fever was (and still is, in some parts of the world) contracted through bites of certain mosquitoes.
-There were conflicting viewpoints on how to treat the fever. Some doctors thought the pestilence must be bled from the victims. Others believed that clean water, fresh air, and liquids were the best treatment.
-The Free African Society of Philadephia was to thank for caring for so many sick people, turning away any attempts at compensation.
-Thousands of children were orphaned as a result of this illness.
-There were so many deaths that men rolled wheelbarrows throughout the city every morning calling for families to throw out their dead.
-Homes where yellow fever had been contracted were marked with a yellow strip of cloth tied to the porch railing, doorpost, etc.
-There was such fear of catching the disease that people fled to various surrounding smaller cities, which were guarded by armed men ready to send away or shoot any sick individuals who attempted to enter.
These are only a few interesting facts that Fever 1793 teaches about this very dark period in American history. It is a magnificent piece of historical fiction. 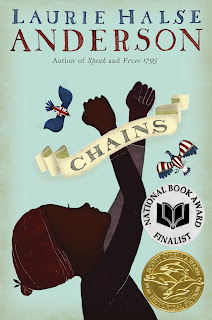 I am a huge Laurie Halse Anderson fan. All of her books are piercingly honest, with just the right amount of wit and humor. Her characters and their dialogue are always spot on, and they bring an element of truth that shine the light of awareness on a variety of stories and issues otherwise unknown or ignored.

Laurie Halse Anderson has quite a voice. Not only does she speak on behalf of those who cannot speak for themselves in her book, she also advocates on behalf of librarians dealing with issues of censorship. I had the distinct honor of attending a dinner with Laurie H.A. at the 2009 American Association of School Librarians Conference. Like her characters, she is witty and intelligent, with a heavy dose of honesty. When she speaks, people listen.

The story she tells in Chains is that of a slave girl whose freedom is hanging between two nations at war.

This is not a feel-good, happily-ever-after sort of book. It is raw and ugly and sad. I grew more broken-hearted for Isabel, the main character, with every passing page.
Set in volatile America in the 1770's, this book shows yet another horrific side of the war for independence.

Isabel is a young African American teenager who has had everything taken from her. Born a slave, she has never known freedom. She is an orphan charged with the care of her 5 year old baby sister, who suffers from seizures. Their mistress, who treated them well, taught her to read, and has even left in her will for them to be freed, has passed away. Her nephew, however, did not honor that request and promptly sells them to a cruel couple who are deeply devoted to the Loyalist cause. Isabel learns a great deal about the politics of war in their home. To say that she is treated like garbage would be quite the understatement. I have never despised a villain the way I have Madam Lockton, Isabel's new mistress.

Through it all, Isabel's hope to gain freedom for herself and her sister press her to become involved in the war by serving as a spy. She helps the American side, with their promise that she will be freed. Rather than being freed, however, Isabel is beaten until she can't think, has her teeth broken, is locked in stocks, and then branded on her face with a capital I (for Insolence). The Americans who promised her help turn their back on her. She eventually becomes (unwillingly) involved with the British side of the war, but they too use her and cast her aside.

Everyone seems willing to sacrifice the life, health, and spirit of this poor child. As desperate as the war for independence must have been, it is likely that there were many Isabels who unknowingly (and with great sacrifice) contributed to the success of the Americans. Yet, when our children study the American Revolution, where is the recognition of these individuals? As much as I love my country, I feel shame for the way these people, these Isabels, were treated. I do not know how all those people reconciled their desperate plight for freedom while they bought, sold, abused, and starved other human beings.  I am thankful for the Laurie Halse Andersons in the world who use their voice to speak for victims like Isabel.

*Chains is a National Book Award finalist and 2009 winner of the prestigious Scott O'Dell Award for Historical Fiction. Visit the author's site for teaching resources and discussion guides: http://www.writerlady.com/chainsh.html.

This is the story about an Iranian family who barely escaped death during the tumultuous 70's.

This is the story of a boy who experienced major culture shock when transplanted from the Persian Middle East to the American Deep South.

This is the story of a teenage boy's desperation to fit in, to stand out, to be understood, and yet to remain mysterious all at the same time.

This is the story of a man who has, is, and will likely continue to be used in some very big ways to effect positive change.

This is the story of how a new family was woven together from the fabric of two sets of very different religious and cultural heritage.

This story is good enough to be fiction, and without some prior knowledge of the author, I would have sworn it to be so. Action, suspense, romance, mystery? Who knew autobiographies could be so exciting?!

Sprinkled with interesting tidbits of Iranian culture, Jumping Through Fires is the author's amazing life experiences, beginning with his firsthand encounters with the crumbling of Iran's government in the 1970's. Once his family successfully began their new life in America, he experienced a whole new batch of issues in his young life. David Nasser was raised Muslim, but over time and through many elements, as a teenager he became a follower of Jesus Christ. His conversion led him to become a leader among his peers, and eventually a speaker to masses. Once a punk teenager lying to his parents, selling drugs, and rudely mistreating everyone "beneath" him, Nasser has become a respected authority in the transforming grace of God. His transparency in telling his story is rather unlikely from those in such positions of leadership.

My new favorite quote:
"His [God's] unceasing presence in our yesterdays is our hope and assurance for the fires of our tomorrows." pg. 170

I have had this book in a stack for some months now, and I must admit that I hated every word of it for about 5 chapters. Many times I will abandon a book that I feel is a waste of my time, but for some reason I stuck with this one...and I'm so glad that I did.

Set in the mid-60's, this book is about Holling Hoodhood's (yep, that's his name) weekly experiences with a teacher who he is convinced hates his guts. At this point in educational history, students were dismissed midday on Wednesdays to go to their respective churches or temples and learn about their religion. The Catholic students went to parochial school to learn about Catholicism, and the Jewish students went to Hebrew school to prepare for the bar and bat mitzvahs. That left Holling, a Presbyterian, who had nowehere to go, and therefore was stuck with Mrs. Baker. Their "Wednesday wars" are actually some creative and meaningful times spent together that grow Holling in ways that could never have been anticipated.

What was most interesting to me was how Schmidt makes the interactions with Mrs. Baker (the teacher who Holling thinks hates him) the star of this novel, and how there are so many intriguing side-stories that are much more important and significant than her literature lessons. Here are a few of them:
1. Holling's father is an architect, and a successful one. He's also a jerk. This affects Holling, his mother and sister, and his friends in some very important ways.
2. The story is set during the Vietnam war. Mrs. Baker's husband is a soldier, and becomes trapped behind enemy lines.
3. The culture of the Vitenam era is also a pressing, and most interesting, issue in this tale. One of Holling's classmates is a Vietnamese orphan who has had nothing whatsoever to do with the war, yet she takes the brunt of the town's frustrations in some very demeaning and hateful ways.
4. Initially considered the bane of his existence, Mrs. Baker is actually Holling's strongest ally.
4. Mrs. Baker is an awesome teacher, whose strongest characteristics are her perception, her discretion, and her compassion. We could all take a few notes from Mrs. Baker.

My primary concern during the first few chapters was that students would not be engaged in this book. Set in a different time period in a different part of the country that had very different anxieties than our students currently experience, I worried that it would be much too foreign for them to relate. Then again, I will be the first to acknowledge that one of the greatest gifts literature can offer us is the ability to step outside ourselves and our problems and our egos and into the shoes of another person we would never perhaps even meet, much less be.

It's a good book, and I'll recommend it to my 5th graders... maybe some 4th graders as well. But, I know now HOW to recommend it and prepare my students for its consumption. The Wednesday Wars: Handle With Care!

*The Wednesday Wars is a Newbery Honor Book.