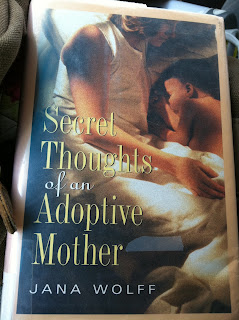 (This library issue was an older copy. The newer version features updated cover art.)
In this charmingly poignant memoir, Jana Wolff gets away with the kind of transparency most adoptive moms find elusive. In her honesty, she gets to say all the things adoptive mothers think at one point or another in their process. She gets to share the brutally honest "Dear Birth Mother" letter she really wanted to write, and she gets the chance to pop off all the witty retorts she'd ever thought toward people's nosy inquiries or observations about her son.

She gets to do all of this because Jana Wolff knows she is preaching to the audience. She has adoptive moms pegged from the prologue, and that makes this a great read; light, simple, and fun, but also serious and emotional.

Wolff and her husband (both Jewish) adopted their biracial son (whose heritage is a blend of black and Hispanic races) through a domestic, open adoption. This book chronicles their adoption experience from facing infertility to moving along into the adoption process, and all the way from interviewing with birth mothers to witnessing the birth of their son and beyond into their new life as a family. Wolff infuses each step with a clear depiction of her thoughts and emotions at each stage, which makes this an invaluable book for adoptive mothers. Having recently completed an adoption process (even though mine was neither domestic nor open), I found myself deeply comforted by Wolff's observations and emotional candor. I wish I'd had this book to read at the beginning of our journey!

For more information on Jana Wolff, go to: http://www.janawolff.com. I found the page with her articles and blog posts quite interesting!

Too Small to Ignore: Why the Least of These Matters Most (Wess Stafford) 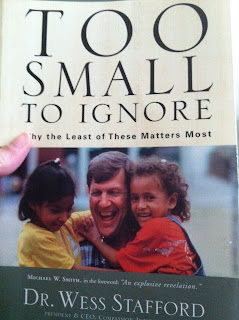 Today, Wess Stafford is the president and CEO of Compassion International, which is a global child-focused sponsorship organization grounded in Christlike principles. Compassion International helps over 1 million impoverished children and their families with basic needs and education in at least 26 different countries. Today, Wess Stafford is at the helm of one of the largest and most efficient aid organizations in the world.

Fifty years ago, Wess Stafford was growing up in a tiny West African village (with French influence) called Nielle. In this book, he describes his childhood and the wonderful pieces of wisdom he discovered about life through the people of Nielle...the most important being that all children are important. He writes about the differences in typical American culture and typical African culture, and how valued children tend to be in African circles. Children are given important jobs. They are always included, never shut out or sent to a play room to be occupied while dinner was cooked. They were watched over but not hovered over. Life was and is very dangerous for a child in Africa, so they were and are taught responsibility and how to contribute at a very early age. Children are counted on because all children are important.

Stafford's interesting perspective on child advocacy comes from his experiences of being highly valued as a child in Nielle, but it also grows out of some very ugly experiences in a boarding school several months out of the year in another part of West Africa. There he and his sister, along with hundreds of other kids, were abused in the worst ways possible by people who had been entrusted with their care. Describing a few dark memories from this time, he shows how ugly people can be to innocent children...especially when those people know that the children cannot speak out for themselves and will not be heard by anyone who could help them. Their experiences are much like that of millions of children who are abused and neglected on a regular basis. Adults abuse children because they are powerless. Most of the time adults abuse children who are too small to have a voice, or they scare them into silence. Stafford challenges readers to view children as God sees them: as important. He gives several examples from Scripture when God had a big task and only a little child would do. Jesus Himself publicly admonished his disciples at least twice because they were trying to belittle the relevance of children in His presence.

If this sounds like a book for you, be warned that there are some truly horrific stories within these pages. Some of them are from Wess Stafford's visit to Haiti or Rwanda. All of these stories, combined with Stafford's personal childhood, have sparked a bottomless passion within him to advocate for children on every level of society but especially the most powerless: the poor. He presents some specific ideas for changing the way the world thinks about children, and ways to elevate them from being a discarded member or society to an intensely valued member of society. Wess Stafford is intensely passionate that all children are important, and by the time you finish the last page, you'll believe that just as deeply as he does.

Too Small to Ignore: Why the Least of These Matters Most (Wess Stafford)