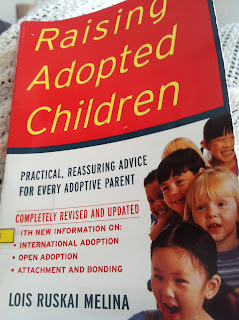 Of all the adoption books I read, this was by far one of the most comprehensive. It is my opinion that frequently adoption book authors make the mistake of either being either too flowery with not enough actual helpful content or being too cold and diagnostic without the proper accent of emotion. This book struck a good balance between the two.
One of my favorite aspects was that she went to great care to include tips and advice for every possible scenario in adoptive families. It was the first time I've read a book that includes information for adoptive families who already have biological children, and advice on how to promote bonding between the two. It was for the first time that I read in this book a several-page section detailing adoption and breastfeeding, and how and when to decide if it's right for your family.
I've long since returned this one to the library, but still my mind drifts back to statements of truth about the adoption experience from this book. That probably means it's time for a hard copy to go on my shelf! 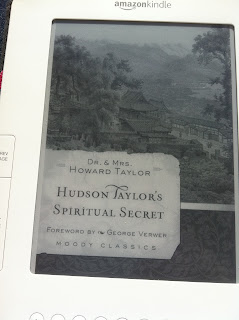 What do you believe in?
I'm not talking Mac over PC, or Percy Jackson over Harry Potter, or even Nutella over peanut butter. (Though of course, the correct choices are in fact Mac, Harry, and Nutella.)
No, but really...what do you really believe in? What do you believe in so strongly that you would give up your money, your home...even your family?
Hudson Taylor's single focused passion, which fueled his efforts as a pioneer missionary to China in the 1800's, was his salvation in Jesus Christ.
Hudson Taylor lived a life of sacrifice just to have the opportunity to travel to China and work with the people there, and during his years serving the Chinese he experienced death, destruction, violence, and resistance from the government. He lost children and even his wife. He lost his health. At one point, he even lost his mobility. But, champion of faith that he was, Hudson Taylor never wavered from his calling to serve the people of inland China through medical and evangelical missions. He was known as an oddball because he was the first to dress in traditional Chinese attire and to shave his head (leaving the long braided ponytail) in the customary manner of the people he was serving. But eventually others realized that his strategy was working, as it earned him favor and understanding with the Chinese.
His biography, written in 1932 by his son and daughter-in-law, alternates betwixt excerpts from Hudson's personal letters and journal to narrative descriptions of the events he and his family faced during their years in China. The book emphasizes the strength of his faith, and explains throughout that his "spiritual secret" was a joyful and willing submission of trust to God's plan for his life and for the people of China.
I found this book oddly sluggish at times yet compelling at others. Ultimately, I was utterly fascinated by Hudson Taylor, but I found this particular telling of his life and work substandard. His legacy deserves a better, more clarified biography than this particular book offers. 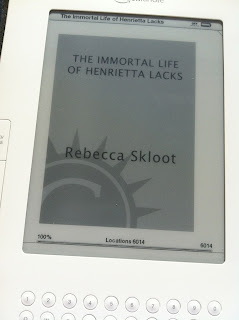 Ever heard of something called HeLa cells? Yeah, umm, me either...not until a few months ago, anyway.


HeLa is a building block of cell science and a cornerstone of modern medical research. Among numerous other very interesting uses, HeLa cells were used in the first space missions to test the effects of space on human cells, they were used in nuclear experiments, and they were (and still are) used to develop important vaccines, chemotherapies, and radiation treatments that have and continue to save millions of human lives. HeLa is widely known in the medical science community as one of the most important tools in the development of modern medicine. The purchase and sale of HeLa cells for the purpose of medical research over time likely numbers somewhere in the billions.


This book goes into painstaking detail about the relevance of HeLa cells in the existence of mankind, but its primary purpose is to shed some light on how HeLa came to be...which went a little something like this:


Once upon a time there was a woman, a wife and mother to several children. She suffered several medical ailments on and off in her life, but one day she became very ill and was diagnosed with cervical cancer. The doctor treated her with radiation, but the cancer spread and in her very early thirties this young woman died. After her death, cells were removed from her body and used in an experiment of cell division. Unlike any other cell in that experiment, this woman's cells kept dividing. And kept dividing. And kept dividing. And even unto this very day, they are still continuing to divide. Because of this unique type of cell division and multiplication, the woman's cells were extremely valuable for a multitude of research purposes. The woman's name was Henrietta Lacks. Likely because it was the 1950's and even more likely because Henrietta Lacks was a black woman, her family was never informed of the cultivation of her cells for research and certainly not informed of their value. Today, Henrietta's family is trapped between an expired statute of limitations on the several infringements committed toward them and an understandable inability to trust anyone in the legal or medical communities after a lifetime of  betrayals they have experienced. They have lived 60 years of intense frustration, and no one in the Lacks family has lived happily ever after.

What a sad, sad story. Henrietta Lacks left a legacy that has transformed medical science, yet her own children stated at one point that they were so poor that they couldn't even afford health insurance.

Somehow the author of this book won the trust of the Lacks family and was therefore able to put together this very comprehensive tale of Henrietta's life and background, her medical treatments, and the process of the discovery and subsequent uses of HeLa cells. It is incredibly thorough and in the author's own words was extensively fact-checked.

The thoughts that continued to run through my mind while trudging through the bits of cellular science history were that the real untold story here is that this family has been exploited in ways unimaginable. Their disadvantages due to poverty and race (at that time) made them easy prey for the people who they should have been able to trust: the doctors. What has been done to the Lacks family is positively inexcusable, and why no reparations have been made to Henrietta's descendants is beyond me.

In addition to her cells' contributions to science, the controversy surrounding Henrietta's family's experience has led to a revolution in the way patients are required to be informed and to give consent for their treatments or for bits removed from their bodies. What you and I take for granted in that stack of release, privacy, and consent forms we fill out at the doc's office or for pre-operative processing, Henrietta was never given the opportunity to consider. You can thank Henrietta Lacks for her seemingly ceaseless contributions to science, but you can also thank her for your right today as a patient to be informed and to give consent to procedures that involve your body and what is removed from it. And we can all thank Rebecca Skloot for telling Henrietta's story.

*The author used a portion of her earnings from sale of her book to establish the Henrietta Lacks Foundation, which is a foundation that provides scholarships and grants for descendants of Henrietta Lacks as well as descendants of other research subjects (ex: the Tuskegee experiments). Learn more about that here: http://www.henriettalacksfoundation.org/

For more about the author and Henrietta's story, go to http://rebeccaskloot.com/.