This space has served me and my little book-reading habit well over the past eight years, but now we are moving on to greener pastures. Come along with us to www.asouthernruckus.com for new reviews as well as replays of old favorites.

Middle School: Get Me Out of Here! (James Patterson) 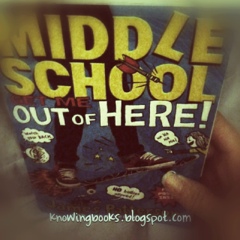 The more I think about it, the more sense it makes that James Patterson would venture into middle school territory. This is, after all, one of the scariest and more perplexing places on earth.

In his first book of this series, Rafe Khatchadorian managed so survive his 6th grade year at Hills Village Middle. Barely. My favorite piece was that the skills Rafe uses (humorously...even teasingly) to cope during a hard year are the very traits that are part of who he is meant to be in life. In that way, the Middle School books are perfect for showing just how important these years are. This IS when kids are beginning to discover the things about themselves that they hate, sure, but more importantly, they are beginning to uncover the things about themselves that they like.

In this second installment, Rafe is in art school and loving it. Finally he is in a place where he feel comfortable just being him! Then, of course, because this is a school and there are other kids involved, the bullying and misunderstanding and rule-breaking begins...and all from quite unexpected sources.

I was a smidge bored with this one the first half because it seemed to be following the same exact pattern as the first book. Misfit kid makes up game as a coping mechanism, which will obviously land him in trouble with his peers as well as the powers-that-be in his school. Patterson is better than this was my analytical echo throughout every chapter. About two thirds into it, however, things got good quick. My hope for readers is that they'll not be bored by the repetition so long that they lose interest before they hit the hook. Interesting format, though it smells similar to Andrew Clements's typical fiction setup.

I have been this confused since reading the first three Harry Potters and pronouncing Hermione as (Hermeeeown). {hanging my head in shame}

Middle School: Get Me Out of Here! (James Patterson)

Email ThisBlogThis!Share to TwitterShare to FacebookShare to Pinterest
Labels: books for boys, kids 10 and up, kids 12 and up, kids 8-12, young adult fiction 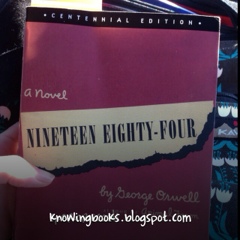 That last book? Yeah, I had to read it pretty much solely to recover from this one. For the love, 1984 was a wretched work that just made me SAD. From the first chapter on, the dastard depravity of humankind is amplified over and again until we see Winston, the main character, chewed up and spewed out by the reality that is unfortunately his.

Winston works in the Records Department in the Ministry of Truth. His actual responsibilities include changing past records to accommodate the lies that the Party perpetuates regarding anything from the number of boots created one month to the country with whom they are currently at war. Winston's problem is that he is an anomaly to society: he notices and remembers the Party's alterations to the truth. Over time, he evolves from just a curious observer blindly carrying out his sad little life to a willing volunteer of the Brotherhood intent on bringing the Party down.

This leads to a rebellious affair with a fellow Party member named Julia. Julia and Winston fall as much in love as two individuals with no moral compass or liberty know how, and together they change the course of their destiny by committing to the Brotherhood...and subsequently being ripped apart by it.

Just sad. Sad, sad, sad. I was distraught for the broken relationships between parents and children, heart-broken for the callousness of one human being toward another, and overall disgusted with how easy it is to compare the state of Winston's society to the reality of our own. I was positively horrified to take in Winston's torture scenes, especially the one (oh, I can't even type it) with the rats. Lawdyhammercy.

It is said that George Orwell was a genius. I'd agree...this work is a prime example that the man's brain was on a level the rest of us can't even imagine.

A sad genius, though.