Founding Mothers: The Women Who Raised Our Nation by Cokie Roberts 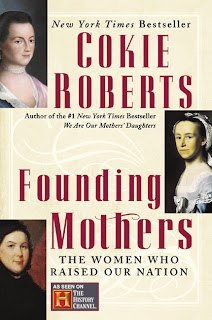 Look, I'm no feminist. I might be one of those who believes that every man and woman are equal, and equally capable, but I also know that guys and girls are different. We each have our own strong points, and as a matter of fact it is pretty genius how one gender complements the other. Good job, Creator.

Don't let this book title put you off. I will admit, I was a little hesitant at first because it seemed as though it would be pushing women as the superior beings and how America would never have existed without chicks. Roberts does a good job, though, of interweaving both the men and the women who were vital to the start of our country.

I listened to this on CD during morning and afternoon commutes, and since auditory processing isn't exactly my strong point, I have already forgotten some names and dates. The general gist of it is that while so much attention is given to historical men in American society, we don't ever really even think about the women. That really is true, too. There are countless biographies of Thomas Jefferson, John Adams, Benjamin Franklin, Alexander Hamilton, and George Washington...but what about the women in their lives? Who do we think did their laundry and ran their households, raised money, and tended to their wounds while they were off winning the nation's independence?

That's only the icing on the cake. It's no wonder that George Washington himself referred to the women of America as the "best patriots America could boast."

Founding Mothers: The Women Who Raised Our Nation by Cokie Roberts