The Girl With the Dragon Tattoo (Stieg Larsson) 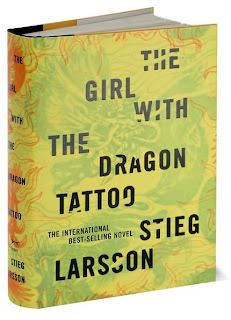 Mikael Blomkvist is a reporter who has been convicted of libel. He has a hefty fine to pay and a gaol sentence to serve, but he is mostly concerned with saving his magazine, which is primed for closure given Mikael's conviction. Before he can work out his next moves, he is summoned by Henrik Vanger, who turns out to be the head of the Vanger family and CEO of the Vanger Corporation. Henrik has spent the last 40 years obsessing over the unsolved murder of his niece. He wants Mikael to comb through the files just one more time to see if he can uncover what really happened to Harriet. Mikael's venture into the questions that surround Harriet's murder, and the eccentricities which cloud the family gradually lead Mikael to uncover some of the deepest, darkest secrets beyond all the Vangers could have possibly imagined.

The girl who actually has the dragon tattoo is the most important part of this story. Her name is Salander, and though she seems a bit frightful, she has very good reason to be just that. Salander saves Mikael in every way one human can save another, and becomes an important part of his team.

There are several crucial pieces of the Dragon Tattoo pie missing here that would positively ruin a fantastic read if I were to share them. The first in a series of 3, and which already has a movie version out, The Girl With the Dragon Tattoo was a bit tedious at first but quickly escalated to one that I could not put down. The coarse language and descriptive chunks of vile s*xual crimes was at times oppressive, and I could definitely have done without so much of both. I had no idea that Sweden has such a dark history of violence against women, and this book definitely changed my perspective of that country as well.

The Girl With the Dragon Tattoo (Stieg Larsson)