Uganda: Enchantment of the World (Revised Edition, by Ettagale Blauer and Jason Laure')

My family and I are adopting a child from Uganda. For that reason, I have been on the hunt for all books Ugandan. 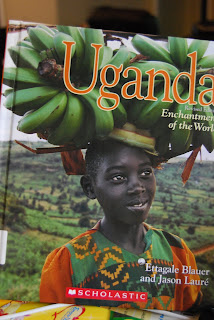 Of all the literature I have read about Uganda, this is my absolute favorite. It is the most thorough, comprehensive, and understandable. It has the best illustrations and resources. Every time I read a book about Uganda, I learn new things that I find interesting. This book, however, is filled with information that keeps making me think, I have to remember this for our child. The authors delve into great detail about plant and animal life, as well as famous women in Uganda's history.


Here are some of the highlights:
-Uganda has very, very fertile farmland. Even in the poorest days of The Great Depression, Ugandans could still grow crops to feed themselves.
-The "kings" of Uganda are called kabaka (KAH-ba-kah). The President rules over the nation, but the kabakas are very important to the people as a figurehead and representative. The current kabaka (Uganda's 34th) is Kabaka Mutebi II, Ronald Muwenda Mutebi.
-Oil was recently discovered in western Uganda. Hmmm. It will be interesting to see how that will spark interest in this country, worldwide.
-Uganda's terrain is diverse. There are vast grasslands, and there are mountainous regions. Margherita Peak in the Rwenzori mountains is the third highest peak in all of Africa.
-The size of Uganda is 91, 111 square miles, which is comparable to the U.S. state of Oregon. About 15% of the total area is covered in water. This is probably why Uganda has such fertile soil!
-The Bwindi Impenetrable Forest contains many species of animals, but is also home to the rare mountain gorilla as well as pods of chimpanzees. Those who have studied the chimps has noticed that mothers and sons remain in close relationships in the wold for over 40 years. Daughters leave their mothers when they are mature enough to start their own families.
-The water hyacinth is a beautiful type of water lily that was brought to Uganda because of its beautiful flowers, but soon it grew so quickly that it began to choke up the waterways. Ugandans had to introduce a type of weevil which helps slow the hyacinth's growth. Pretty cool fact! I can't wait to see those water hyacinths myself when we travel to meet our child.
-Princess Elizabeth of Toro was the first Ugandan woman to become a lawyer.
-Coffee is Uganda's main agricultural export. Tea, sugarcane, and coffee are also produced in and exported from Uganda.
-There are about 20 various ethnic groups in Uganda. The largest is the Baganda.
-Karamajong women make scar patterns with tiny cuts all over their faces. These marks are considered a sign of beauty.
-There are over 2 million orphans in Uganda. These children have lost their parents due to war, death, and disease.
-Soccer, basketball, and cricket are the most popular sports in Uganda.
-For women, the national dress of Uganda is the basuuti, which is a long brightly colored dress with a sash (called a kitambaala) to hold the dress in place.
-Every year there is a special race called the Royal Ascot Goat Race. People push their goats along to the finish line, and prizes are awarded for the best costumes. This event takes place at the Royal Speke Resort in Munyonyo.
-One of the most inspiring Ugandan athletes is Bashir Ramathan. He is a blind middle-weight boxer!


Uganda's history is detailed in this book. It is a relatively new country but with a long and dark history. The basic overview is that indigenous people inhabited the area until Europeans came looking for the source of the Nile River (which is Lake Victoria-in Uganda). Meanwhile, Arab traders and Christian missionaries were infusing into the region. It was at this point (1840's) that the Arab traders began to trade humans who had been captured by opposing tribes and sold into slavery. The Ugandan slaves were taken to Brazil and the Caribbean islands, and it's not stated but I'm sure some ended up in America as slaves as well. In 1894 Uganda was settled as a British colony/protectorate. Eventually the Ugandans got sick of Britain taking their tax money and not giving them any authority over their own country, and on October 9, 1962 Uganda finally gained its independence. It was the end of some troubles for Ugandans, but the beginning of many other troubles that came in the form of political factions and instability. Groups were vying for power in the country when Milton Obote took over by force. The Ugandan Parliament voted him out of office in 1966, but he again used the army to take direct physical control of the country. He suspended the constitution and implemented martial law. General Idi Amin was the most powerful military leader who assisted Obote with this take-over, and Obote continually grew suspicious of the amount of control Amin had. He was right to be concerned, because as soon as he left Uganda for a short trip, Amin forcibly took over reign in Uganda, and this began the darkest days of all in Uganda's history. Idi Amin was crazy, and extremely paranoid. He commanded the deaths of 300, 000 Ugandan citizens (men, women, and children) in the most heinous ways possible. Uganda has had a new, stable, positive President since 1986 (Yoweri Museveni), but in many ways the country continues to suffer from the attrocities of life in Idi Amin's reign.

English is the official language, but there are many many tribal languages spoken throughout the country. Lugandan is the most popular of these, and we will be striving to teach our child some of these words and phrases from her birth country. So...

Uganda: Enchantment of the World (Revised Edition, by Ettagale Blauer and Jason Laure')