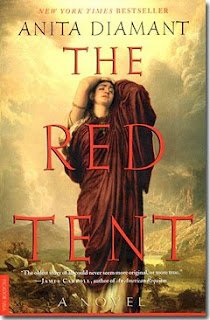 Thousands of years ago life was obviously much different than modern existence. One rule of nature that has not changed, however, is the waning and waxing of the moon's monthly cycle...and the way women marked their own monthly cycles by the moon. The Red Tent is a book about so many things and biblical characters, but centers on the way women took their place in the red tent of the family during their monthly bleeding. I have had this on my list for a long time and always thought the women were SENT to the red tent, and that they had to go in order to separate their uncleanness from society. Po thangs. Yeah, only, Diamant paints a much different picture. There was quite a par-tay going on up in that red tent. Or there was in her telling of it, anyhow.
So Dinah is our narrator, and she just so happens to be the only surviving daughter of Leah. For some biblical background, Leah was the first wife of Jacob (Isaac's son and Abraham's grandson) and sister to Rachel. Jacob ended up taking 4 wives total, all sisters. It seems as though Dinah truly was the only surviving daughter of Jacob and his wives, even with a whole fleet of brothers.
We learn, along with Dinah, that every month, the appearance of the new moon was a signal for the women of Dinah's family to retreat to their red tent. This is where the women would go and have their "time" away from the rest of the men. They also birthed their babies and recovered from delivery in the red tent. They sang songs together, rubbed one another's feet feet with oil, told family stories and legends, ate sweet cakes drizzled with honey, and massaged one another's shoulders. This was 3 days of pure girl time that gave them the opportunity to rest and relax before another month of the grueling service of everyday life.
It's also important to note that included in Dinah's tale is the (fictionalized) version of the events surrounding the biblical Old Testament Jacob (who cheated his twin Esau out of a birth right); his wives Leah, Rachel, and their sisters; his pack of sons who ranged from precious and gentle to hateful and greedy; Dinah's marriage and the tragedy that resulted at the hand of her brothers; and the sale of Joseph into slavery, along with his rise to power in Egypt. All of these are embellished with Diamant's imagination and characteristics of people of this time that could have occurred, though there is no biblical record.
Those women were on to something! Retreating to the red tent for sweet cakes, pedicures, hand massages, singing, and storytelling...they had the world's best-kept secret because no man would dare try to enter their tent and disturb them during this time! Why in the world aren't we permitting ourself a trip to the red tent?!
For all that I loved about their red tent, I also considered it a dangerous foothold. The women had no religion other than the worship of the household and fertility idols passed down in their family, and the idols were quite prevalent in all the women's dealings, to say the least. In this book the only exposure Jacob gave of his worship to the one true God was that he did so himself, failing to teach his wives about the Lord as well. This can be a danger for every believer, and I pray that I will not be selfish with what I know and learn about my God.
The idolatry was bothersome, and there were also some other troublesome details about everyday life, including the suggestion of bestiality among the shepherds, the physical use of an idol to "unlock" a girl's  womb, and Dinah's version of eternity...to name a few.
I don't take all the details in Diamant's book as truth, but I do enjoy having my mind opened to what daily life might truly have been like for Jacob, Leah, Rachel, Bilhah, Zilphah, Joseph, and our dear sweet Dinah. Interestingly enough, I always sort of felt sorry for Joseph. You know, favorite son, target, odd man out, sensitive, visions and the like; however, this book paints him as a real prick. And the more I consider it, the more likely that seems to have been. The Bible indeed does give clear indication that he had quite a bit of pride to reckon with.
So although I really raised my eyebrows at some of its contents, I really enjoy and value any book that gives me pause to consider the blanks left in the biblical account.
*Find The Truth about Dinah and her peeps in Genesis 29-38.