The Girl Who Played With Fire (Stieg Larsson) 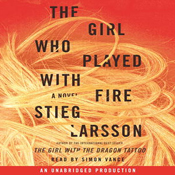 Meet the second installment in the Stieg Larsson series.

Salander remains a force to be reckoned with, as does Mikael Blomkvist.

Just before an expose' on the prevalence of sex trafficking in Sweden was set to be published, its authors are cruelly murdered. Mikael has the distinct misfortune of arriving at their apartment very briefly after the killings occur, and becomes intrinsically linked to the case.

Salander disappeared after the conclusion of their last adventure and is tucked away minding her own business until suddenly she becomes accused of the murders, and another-the slaying of a man who she had every reason to kill.

Oddly enough, the hunt for Salander eventually leads to the discovery of her father, whom she never wished to see again after a time in their life she referred to as "All the Evil." It is in this book where we find out exactly what happened to Salander to shape her into the fascinating, ruthless woman that she has become.

All along the way, Mikael trails her, attempting to exonerate her (despite her efforts otherwise). He is the friend to her that she never had, though she fails to recognize it even now, and even though she is determined to kill...again?

The Girl Who Played With Fire (Stieg Larsson)